A patient in her authentic Peruvian garb

Two weeks ago I enjoyed going on a village medical trip for the first time in years. (Not that there were other ones I didn't enjoy, it just happened to be the first in years.) It was great to be back out there, speaking Quechua, working with other doctors, and it was especially fun to not be in charge! Medical Ministry International (MMI) organizes monthly village trips throughout Peru, and they contacted me to ask if I would help with their trip to Chivay, a 3-hour drive from Arequipa. On the night before the first clinic, I debriefed the doctors from the US about what types of maladies we commonly see here and available treatments. One of the doctors, a hand-surgeon, said that he could only work from the elbow down, but when we were out there he did a fantastic job of treating all sorts of body aches and pains. Not only did I not have to buy meds, or make arrangements with pastors and buses, when our bus got stuck in the mud, I could take pictures instead of figuring out how to get out!

Nothing that a pick ax can't solve 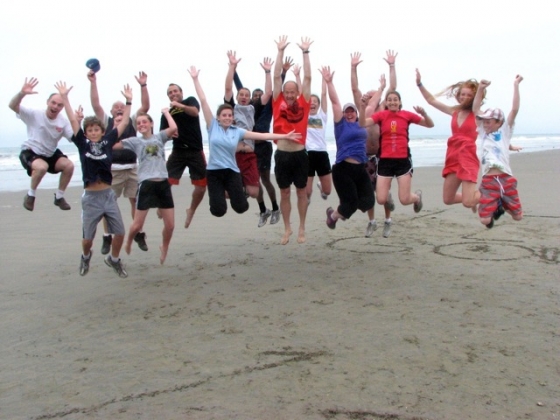 SIM Peru had our Spiritual Life Conference at the Bible Union Camp near Lima.  Every year we gather all the missionaries and kids (77 this year!) and spend time together.  Dr. Stuart Scott from the Southern Baptist Theological Seminary came to teach on Biblical decision making, and a team from Canada led the program for teens and kids.  We also had workshops on 'orality' (how to teach illiterate people Bible stories and truths), multicultural teams, a book review of "When Helping Hurts" and some less-academic events such as a 4.5-mile foot race on the beach called "Race to the Rocks", pictured above.  I guess having running events is one of the risks that come with having a field director who is a running fanatic.

Feliz Navidad! I'm not sure what it means, but it's on all the signs around here! As American missionaries in Peru, we have an eclectic mix of traditions. One has to be careful not to offend the Peruvian Christians. We don't have a Christmas tree, since some of the local believers point out its pagan origens. Yet our church has two, one in the front and one in the back! Despite the unapproving stares of some Peruvians when they visit our house, we do have a nativity set (complete with llama), as that really portrays the whole reason we celebrate. But even with it, there is the struggle between the 'early baby in the manger' faction and the 'put the baby Jesus in the manger on Christmas Day' faction. We've opted for a compromise. Baby Jesus is in the manger, but hidden by swaddling clothes until Christmas Day. On Christmas Eve we will have fondue and eat Panetón, a light fruitcake very popular in Peru. A good loaf costs a day's wages for some, yet almost everyone buys them. May your traditions be fun and remind you of the real 'Reason for the Season'! Serving with you, Allen & Amy ps. In October, we made a plea for more support, and we are glad to report that our support is back up to SIM's requirements. Thanks so much! 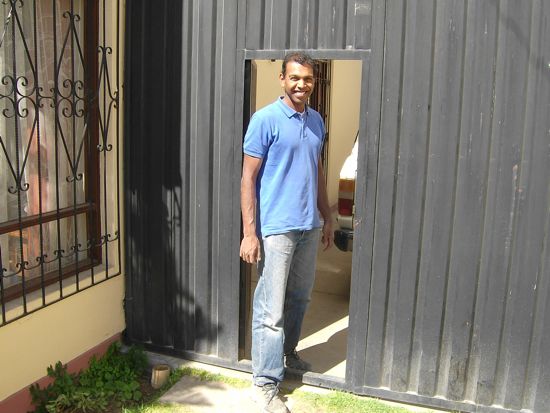 A doorway at just the wrong height.

Thousands of years from now, if the end of the world doesn't come first, scientists will be examining the heads of male foreigners in Peru, and discover that they have bony callouses on the tops of their heads. What were they there for? Beauty? An advantage in head-butting competitions? They will unlikely decipher that we foreigners are just a tiny bit too tall for the local construction. Nebraskans, the progeny of the hardy stock of tall Scandanavians that immigrated in the early 1900s, are tall. I'm not. But in Peru I'm the spiker and blocker on the volleyball team, and the one they ask to hang balloons at the kids' school. Because of this, I've hit my head countless times on city bus doors, concrete beams, even a cactus in the roof of a village house to keep people off of it. (Maybe that's why my memory isn't like it used to be?) One of our new missionaries, David Jeyachandran, is from Australia. He's pretty tall by any measures, which is why less than 1 minute after I said to his wife, "At least I don't have any medical emergencies at this team meeting", he hit his head on the gate, lacerating his scalp. Luckily, our team meeting was at the Reuters' house, who are two of our missionary nurses from Germany. They had suture and needle-drivers, and for about $5 at the local pharmacy, I bought some lidocaine, sterile gloves and needles. With many helping hands we had him sewed up in no time.

In our administrative roles, I think it is normal for doctors to question if they are doing what God has called us to do. He continually sends patients to our door to help us practice what we spent years training to do. 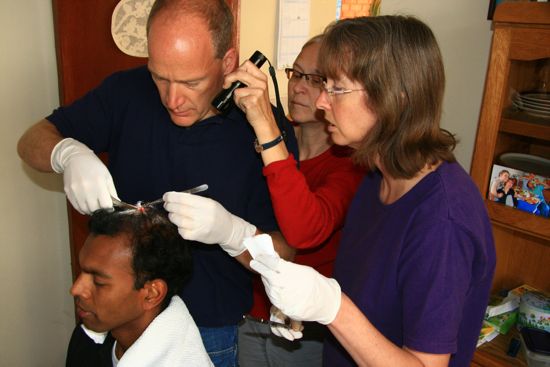 Thursday night, after 2 days of meetings in Lima, I was scheduled to fly back home to Arequipa. As we were about ready to take off, the stewardess announced that we would have to deplane for 'operational errors'. What's that? After we were off of the plane, we were told that the ministry of transportation had closed down the airline for undisclosed reasons. Passengers were speculating whether it was due to drug-trafficking/money laundering, poor maintenance records, or that the new president had started his quest to nationalize large companies. So 120 unhappy people were told to go to the Peruvian Airlines' counter where many bemoaned that they had no clothes, or place to stay, or money for another flight. Each month I go to Lima and buy a box of Dunkin donuts for my kids at the airport on my way home. Since donuts don't keep, and I didn't know when I was going to be home, I started handing them out to other stranded passengers. Within 5 minutes, one asked, "Where are you going to stay tonight? You can come stay at our house!" Next time you need to diffuse a crisis, offer donuts. While some passengers argued with airline personnel and more and more police surrounded us to keep things calm, I slipped off and bought a ticket with another airline for 6:30 Friday morning, went and slept for about 5 hours and arrived home Friday morning.

Pray for safety as I have to travel a fair amount as SIM Peru director.

Welcome to our blog!

It used to be when Peruvians asked us where we were from and we said, "Nebraska", they would reply, "It's really cold there, right?" mistaking Nebraska for Alaska. That all changed about 2 weeks ago. Now they say, "Like Peru, Nebraska?!" This should strike you as odd, as Peru, Nebraska has 569 inhabitants, and is one of only about 3 towns in Nebraska that I haven't personally visited. But a month ago, Marca Perú, a promotional company decided to send a group of big name celebrities to Peru, Nebraska to make a video of them teaching the Peru locals how to act more Peruvian. It's quite entertaining, at least to us. While visiting a fellow missionary's church in Lima on Sunday, I was even introduced as being from Nebraska to give me some automatic cachet.

After dropping the kids off at school, and my morning swim, I started digging through the paperwork that piled up on my desk in the week I was in the USA. I had Skype conferences with a nurse in Florida, who will be coming in June for a medical campaign, and with the SIM International Personnel director, (former Peru missionary Helen Heron) about a Swiss couple applying to come to Peru. E***, a Peruvian planning to return to ministry in Asia, came for a meeting to discuss how SIM can help her logistically, and stayed for lunch. The afternoon included orthodontist appointments, buying school uniforms (We love school uniforms! No arguments about what to wear), and helping with German homework.

Friday, while I was in the States, Dámaris, our secretary, had gone to the bus station to pick up a package. In it were the passports and official Peruvian ID cards for one of our families that is going on home assignment soon. In a rough part of town, 4 young men reached into the taxi and grabbed the parcel. "Oh no! The passports!" she thought, and got out of the taxi and chased after them yelling, "Please! In the name of God, give me back the passports!" She followed them around a city block enclosing a market full of stalls, which they ducked into. Another woman started running after them as well, and they gave her back the package, including Dámaris' camera, about $150 in cash and the passports! She only lost her coin purse that contained about $10. If she hadn't gotten the passports back, the missionaries would probably have missed their flight getting their paperwork all in order. We agreed that she will always keep passports in a special case hidden under her clothes from now on, and not chase down thugs!

For Carlos, a taxi driver who recently accepted Christ. He gave me a ride home yesterday and asked about baptism, but more out of curiosity than a desire to do it himself. He seemed interested when I offered to study what the Bible says about baptism with him, but didn't give me a definite date to do so.

We are Allen and Mary Beth George from Nebraska and Manitoba respectively.  Allen has been serving in Peru with SIM since 2000 when he arrived with his late wife, Amy.   Mary Beth has been serving in Peru since 2005.   Allen's oldest daughter, Sarah and her husband Zach Davis, are in their 2nd year of medical school at the University of Illinois-Chicago.  Ben is working for Sanctuary Systems in Fremont, North Carolina as a textiles scientist.  Mia is in her 3rd year at Azusa Pacific University studying pre-physical therapy.  Paul is a freshman studying software engineering at UNL. 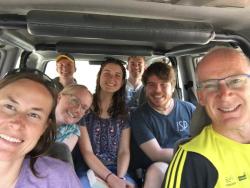 The Georges are on Home Assignment in North America until February or March of 2022 when they will return to Peru to start a new church plant in La Punta de Bombón on the coast about two and a half hours from Arequipa, where they were living until June of 2021.